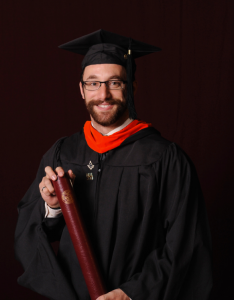 Algebra. We’ve all known someone who struggled with it, right? But just knowing there are people out there for whom algebra comes easily is a huge relief to the rest of us!

So what is Algebra? It is a branch of mathematics that deals in representing numbers through variables, and also deals with symbols, relations, functions, and equations.

MAT 180 includes the algebra of functions, graphs and applications, absolute value equations and inequalities, polynomial, rational, radical, quadratic and piecewise functions, and the application of basic right triangle trigonometry. For some, this would leave your head spinning.

Sharing the Value of Learning

Joe says that “teaching is in my nature,” and that he was influenced by his mother who was a career teacher before retiring. He tutored in Delaware Tech’s Mathematics Department back in 2008-09 when he was a student there and said that he “enjoys sharing the value of learning with others.”